So there I am (2 Guyz Brian here), watching TV a week or so before Christmas. A busy season, lots of work, teaching, and travel, plus colds and flu. So I opted to catch up on a few holiday movies. (Love Actually is my current fave. For 2 Guyz Larry it’s Elf. One of the best Christmas movies ever)

A TV spot comes on, with a Santa whacking a clever on some products. I notices, though not so much as to catch the gist of it…until the end. An elf enters the workshop, delivers a line, and Santa, mistaking something, exclaims, “Sh*t,” yes, that word.

I almost didn’t believe my eyes, or ears, but a quick HDR rewind, and yup, that’s what I saw and heard. I even asked the wife in to watch it to make sure what I thought was the S-bomb, was, in fact, an S-Bomb. In a GameStop® commercial.

This is an interesting topic for the 2 Guyz On Marketing for a few reasons. First, cuss words in the classroom. Cuss words in advertising? Next, cuss words on television. And finally, are cuss words smart marketing and promotion?

On the first point. As long as we have been in marketing (30+ years), there has been an unwritten rule: no swearing. Come close, tap dance on the edge, sure, but don’t cross the line. Sex and innuendo, sure. But swearing? Nope. It does happen all the time in making spots and advertising, not in them.

Back in 1972, George Carlin gave us his classic “7 Words You Can Never Say On Television”. https://www.youtube.com/watch?v=kyBH5oNQOS0 If you have not seen it, it is arguably one of the best comedy routines of all time. But the concept stuck, and those seven words are not uttered on broadcast television.

Those terms, obscene, indecent, and profane (profanity), are hard to define. Even the U.S. Supreme Court has had trouble with it. So it comes down to interpretation, and community standards.

Pay TV is different. HBO, Showtime, and the like, it’s no problem. Even cable networks get away with a lot.

We did a brief poll, and found that the average millennial doesn’t care too much about cussing and swearing. And while not a statistically significant sample, those he spoke to said it’s a non-issue.

As a writer, Brian uses colorful language, but rarely, and only for emphasis and effect. He’s been known to tell students, “A well placed f-bomb can be a powerful thing!”

2 Guy Londre does not allow it in the classroom. “It’s not appropriate.”

But the last issue is the one we are concerned with. Marketing. Is cussing, swearing, and profanity good for marketing and in advertising?

Our answer is, probably not, at least most of the time. The 2 Guyz don’t feel they should be used in Christmas spots.   Oh, holiday spots.

Most often it can be “borrowed interest.” This is the concept of taking something else other than the product to get interest. Think pop song jingles, girls in bathing suits, or gratuitous puppies and kittens. Sure, they all get attention, buy does it ultimately connect with the product and brand being advertised? Usually not.

Also, we have to look at the context. Santa is bashing the products in the commercial, literally hacking them into pieces. Not the best marketing imagery. Seems kind of dumb smashing the products you are selling. Not replacing them.

One counterpoint is the target audience. The 18-34 male is a prime prospect for gaming products. And chances are, 99.99% of them have heard, used, and are pretty immune to language. But what about the little brothers and sisters watching? Or grandma who is visiting for the holidays.

In the case of the 2 Guys On Marketing, we’re less concerned with being the language police. That’s for others. Instead, we’re looking out for the interest of marketers. Making the cash register ring.

2 Guyz Brian’s test for this is, did the use of the device, in this word language, propel the viewer closer to purchasing. And in this case, we think there was, possibly or probably, a better holiday commercial script that got passed over for this one.

One additional thought: Since the use of cuss words are more pervasive in public conversation how soon will one appear in the Super Bowl. Not on the field, but in a TV spot. We hope not soon.

(NOTE:  GameStop® is a registered trademark of  GameStop. All rights reserved.) 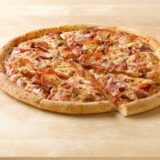 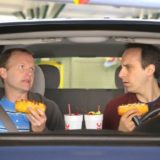 The “Other” Two Guy On Marketing…for Sonic!