The Los Angeles Chargers need to play better. On and off the field.

The Charger Los Angeles (or is it Los Angeles Chargers, their promotion has it both ways), fumbled their Marketing and promotion.

Great to be there at StubHub Center with my co “2 Guyz on Marketing” professional for the first preseason game.

We got their early. Could have been even earlier if they had better parking signage for BLUE parking. We found the RED. And YELLOW. And GREEN. And even GOLD, SILVER, and PLATINUM. Oh, and then finally blue. We circled almost the entire stadium. The art direction on the ticket, the signage and information from parking attendants can only get better, in the communication on where to park.

The good thing is there wasn’t any traffic to speak of. We learned that only 21K were in attendance. Capacity was 27K. How many Charger fans sold their tickets to Seattle fans? We guessed a bunch. Make that thousands.

Sponsorship signage for Bud Light, Coca-Cola, McDonald’s and more was so faded from time in the sun. It was very washed out. Not good, on so many marketing and promotional levels.

Chargers fumbled (interceptions) their first Los Angeles Charger home opener in 57 years. An by our estimation, there were  Seattle Seahawk fans than all combined Charger fans from LA or SD, and in between. You could see it in the Seattle jerseys and hear that in the Seahawk chants. Plus in the score, 48-17.

It has been 57 years since the Los Angeles Chargers played their home opener in 1960 at the Los Angeles Memorial Colisuem. The Chargers did nothing special to celebrate that or their first game at Stubhub Center.

The Chargers “fight for LA” lacked a punch, in their play and promotion. 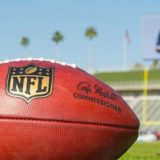