According to Variety, both Fox and NBCUniversal have commissioned research that says or reports that “viewers don’t think negatively about the advertisers in news programs, no matter whether the host leans toward a particular political view or if the news itself is extremely serious.”

The networks can find or commission research to say anything they want.

The 2 Guyz know and teach that there are different audiences watching, Fox, MSNBC and CNN.  Under “People,” in the 9P’s of Marketing, we teach that you can break down an audience into several characteristics, including demographically, geographically, behaviorally, psychographically, and with technographics.

Psychographics is the science of dividing into groups on psychological /personality traits, lifestyle, or values. People in the same demographic groups may be very different in their psychological profiles.

For different products and services, advertisers have always bought environment or the environment of the show. It’s one of the aspects of media planning and buying.

Londre doesn’t buy it that: “Viewers without fail say they don’t penalize a brand for sponsoring something that the company may not stand for,” as the president of NBCUniversal ad sales recently said.

Not surprisingly, the sample size was only 18 for their hour-long interviews. Really, 18 respondents? (We also sometimes teach marketing research, and 18 is hardly projectable for a viewing population of over 100,000,000.

Viewers “…understand the distinction between editorial and advertising,” according the evp of ad sales for Fox News. He went on to say that “…viewers appreciate the commercials they know help put Bret Baier and Chris Wallace on their TV screens.” Really? Do they?

In this hyper-charged political environment, is it that easy to divorce oneself from feelings when news programs, on both sides, are slinging mud and questionable news stories, certainly ones with definitive political points of view?

This sounds much more like a PR campaign to sell more advertising in their shows.

How do networks make money? It’s by selling TV spots. They care about eyeballs. No more, no less. 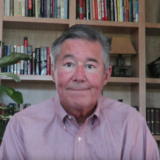