With advertising, promotion and PR examples, as one of the two Marketing Guyz, Larry feels Smirnoff Vodka’s promotional campaign, using print and TV, is trying to create buzz. Smirnoff is using two directions of an advertising campaign. In one they are taking a negative and trying to turn it into a positive. In the other…

Here’s what we know: Smirnoff vodka is Russian but made in America. Is that a positive or a negative or two negatives?

Smirnoff wants to increase sales of their vodka, here in America. Pretty simple, right. Well, maybe not, with all of the competition. And we haven’t got into targeting or craft beers.

Let’s use your brain?

What are the first couple of things you think about with the word “Smirnoff” or Smirnoff vodka? I bet it’s not America and actor, celebrity, Ted Danson.

With their advertising, Smirnoff wants to entice millennial, multicultural consumers and others (“People” in the nine P’s) to purchase their vodka. Danson says in one of the videos, “We’re award winning, we’ve got great taste, been around since 1864 and we’re both surprisingly cheap.”

Danson is promoting the brand’s American heritage. Really, for a Russian vodka made here in America?

He uses a copy point that Smirnoff vodka has been made in America since the 1930s. Not sure it’s the right strategy, copy concept or will it sell vodka, as in Smirnoff vodka?

On another front, this week Smirnoff is using a line from a story about President Trump. The story was featured in the Washington Examiner with the headline “Smirnoff Vodka trolls Trump’s Russia controversy in new ad campaign.”

Smirnoff is also using politics to sell their liquor. Smirnoff Vodka is getting publicity by mocking President Trump’s favoritism to Russia in a new ad campaign. Is that good? It may or may not be?

The copy includes “But we’d be happy to talk about our ties to Russia under oath.”

It was only la short while back that Trump said that he would “100 percent” be willing to testify under oath about the ongoing Russia investigation.

To us, it’s obviously Smirnoff is doing a lot of PR. We’ve seen it. They are trying to create buzz and increase awareness. But Buzz doesn’t mean its making sales.

With my fellow Marketing Guy, Brian Hemsworth, we find current topics and follow them, teach them and consult about marketing, advertising and promotion

The best thing is that the ads feature the hot new (cold) drink, Moscow Mule. It will be replaced by something else soon.

The 2 Guyz on marketing are full service. Here to help.

So for the sake of teaching, what is a Moscow Mule? And who invented it?

The drink, Moscow Mule, is made with Vodka. You can use any vodka. Is it any more special if Smirnoff invented the drink?

The Moscow Mule is a cocktail made with spicy ginger beer, lime juice, vodka, with a lime wedge or slice.

Restaurants have had to add special copper mugs to serve them in. Some just use highball glasses. Not as cool or as trendy, especially for Millennials.

The ingredients to a Moscow Mule:

As 2 Guyz on marketing, we’ll be blending our views and insights on many subjects. 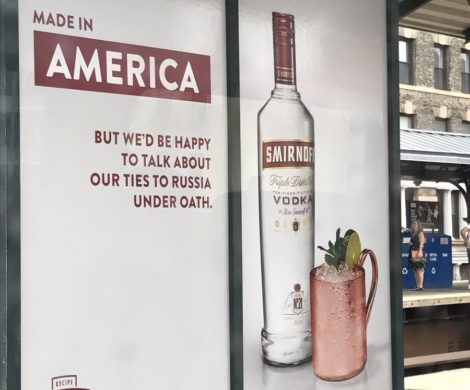 COUNTERPOINT FROM BRIAN: Larry is right, Smirnoff is #1, and they yes, the goal of this campaign is to try to capture new buyers. I’m not so sure it’s targeting millennials, and if it is, I don’t think this is a great effort.

First off, I have a hunch most millennials don’t have the foggiest notion who Ted Danson is, or know a thing about Cheers. Maybe they know he was on CSI. Maybe. But (no offense Ted) he was the old guy

Secondly, while Smirnoff is #1 in sales, their sales are flat. Right now the “craft” vodkas are kicking butt.

Here’s the challenge…millennials like their avocado toast, their craft beer, and their ill fitting hipster clothes that cost too much, but are brands that have cool Instagram accounts.

Is Ted Danson the right guy for this? Now don’t get me wrong, I think Ted Danson is the right guy…for a DIFFERENT target audience. He appeals to Larry and my generation, and we’re not millennials, but a long stretch.

I will say, I really like the bus shelter ad. It’s funny, clever, topic, and makes Smirnoff kind of cool. Ted Danson, not so much.

I also find fault in that there really is little similarity in these ads, and in my class, that would be a big “F” if someone turned in such dissimilar ads in the same campaign.

Ted gets some attention, for baby boomers, but I think Smirnoff misses the mark for millennials.

SMIRNOFF is a trademark of DIAGEO NORTH AMERICA, INC 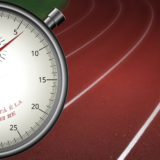